A Small Essay on Interlocking Beads

Welcome to our exhibit #13.

Click on the picture at the bottom of the page to view the exhibit.

Welcome to our exhibit #13. This exhibit will focus on interlocking beads from the early to late 1900s made in Europe by Bapterrosses in Briare (France), Risler Co in Germany, and the Redlhammer Brothers in Gablonz, Bohemia (Jablonec, Czech Republic today).

Interlocking beads are made from two different methods of manufacture.

#1 The Prosser technique, a process consisting of molding a cold paste under great pressure and then firing it, resulting in a porcelain like product. This method allows for only opaque colors and the beads have a rather larger hole (2mm). Prosser beads were among the least expensive ever mass produced.

#2 Regular Bohemian or Czech molded beads which have a small hole (1mm) and can be made in both translucent or opaque glass.

The most common interlocking beads found in the African trade are the "snake" beads. These popular zig-zag shaped beads may not be impressive when looking at a uniform color strand, but become exciting when designed with mixed colors. They do come in many variations from 2 to 6 points which interlock together. Sometimes it is very difficult to see the difference between the beads made by Risler or Redlhammer as some of the models are very similar if not identical. From handling numerous strands and with the help of Bapterrosses and Risler sample cards in the Briare Museum; the Redlhammer cards in the Jablonex Museum; and the ones pictured in Beads from Gablonz by Waltraud Neuwirth, we think we can trace them with a reasonable accuracy to their respective roots and firms.

Bapterrosses made only two models: 6 x 5mm with three points and 9 x 6mm with four points, both with sharper points and slightly longer than the other two companies. They are seen on a Bapterosses card as "Perles serpentines" in 12 different colors in both 6 and 9mm. Dated 1/8/1949.

Except for a card from Bapterosses dated 1949, all the sample cards we are aware of are undated, so it is difficult to pin down the beginning date of manufacture. We believe that the beads coming from the African trade are mostly 1920s - 1960s product from these three companies.

The Risler Co in Freiburg (Germany) - We are unable to find when they stopped producing beads, but it seems to be before or after the demise of World War II.

The Brothers Redlhammer in Gablonz, Bohemia were dispossessed in 1945 and were absorbed by the Preciosa Company in today's Jablonec. We ourselves imported from Preciosa in 1989 the 6mm size snake beads in 18 different colors before the end of production of this type of bead in 1993.

The exhibit will also include other shapes of interlocking beads like dog bone, flower disk and others, most of them common in the African trade. One picture will show interlocking wound Venetian beads and one strand of powder glass from the Krobo people in Ghana.

At the end we will also show a few molded beads that were imported by us from Jablonex between 1988 to 2010 and various sample cards.

Many types of regular interlocking molded beads continue to be made and ordered today (2011). However it seems that any type of beads made by the Prosser method are things of the past and can be considered vintage. 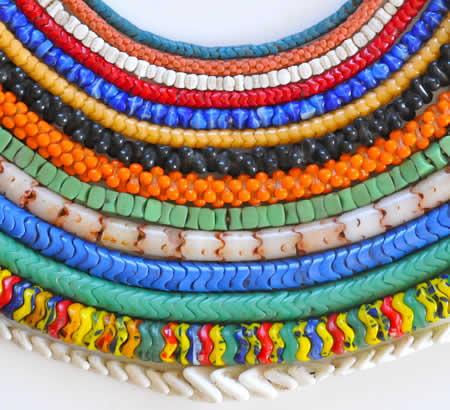