This is a rough compilation of beads found in the African trade which are on pre-1900 sample cards that include:

The beads photographed here are a small percentage of the full account represented on the cards, and we are only showing the beads matching those on these cards. When looking at all these sample cards, the first remarkable thing is to see how so many beads on the cards are not seen in the trade; on the other hand, there are so many beads seen in the trade that are absent on the cards. This is a clear indication of the huge number of beads produced by the Venetians in only a span of about 100 years. - probably in the six figures. Also many of these beads were probably made over a long time period that could be fairly earlier and/or later than 1900, but the cards show for sure that the beads were already in the market at that time.

Although we will mention the Levin cards by their trading commodity names, there is no real evidence that these sample cards of beads traded for gold, ivory, palm oil and slaves are really accurate as to what they were traded for, and therefore are not to be taken literally.

We think that it will be interesting to see many of the beads found in the African trade, some very common, others rare that can be identified on these cards. 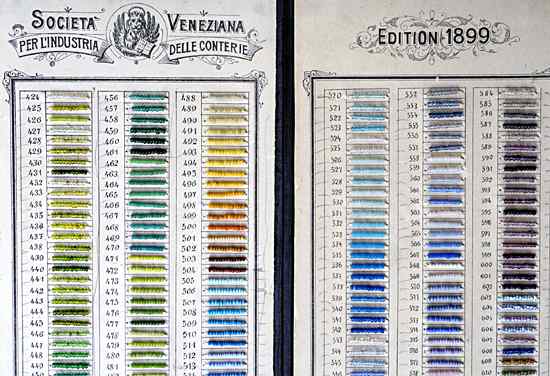