Welcome to our continuing and last exhibit on millefiori beads with composite murrine, this time showing murrine with some type of design center (instead of a plain monochrome center), followed by the ones mixed with two or several different murrine. in this category we are including a set which is technically not made with composite murrine but is rather a mosaic pattern of two different simple monochrome canes (beads #M-187 through M-204). They are unusual and rarely seen and we think they can be included here as there is a similarity between them, although of much simpler construction.

We are adding again specimens from the Sick sample cards housed in the Royal Tropical Institute of Amsterdam which we haven't found yet in the African trade.

We are also including a set of face beads from a sample card that is housed in the Murano Museum of Glass in Venice. They are among the most elaborate composite murrine ever made and should be part of the exhibit. The Card is attributed to the last quarter of the 1800s. Because they are pictures of a picture the quality won't be as sharp as the originals, but still acceptable for references.

For more information on the subject we will refer you to Jamey Allen's introduction and ours in volume VI in our series of Beads from the African Trade. 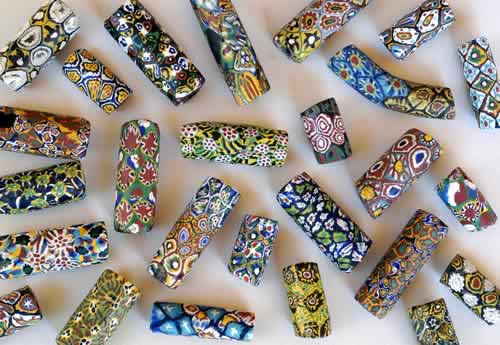