Welcome to our exhibit #12.

This exhibit will focus on Venetian Cornaline d'Aleppo, most often called "white hearts" in the trade and also referred to as "Hudson Bay beads" in North America. Cornaline d'Aleppo are among the most popular beads ever made and can be found almost everywhere from Europe to Africa, Asia and all the Americas. Their exotic name comes from a combination of the words "Aleppo" and "Cornaline". These names were used on Societa Veneziana Conterie sample cards. The words "red or yellow Aleppo" appear on the Edition 1925 card (Aleppo is a city in Syria); and the name "cornaline" (the French word for carnelian, which is a type of agate) appears on the Edition 1899 card.

Cornaline d’Aleppo are two-layer compound beads. Their inner core is white or yellow, and they come either drawn or wound. Their outer layer which often overlaps and hides the core comes in a large array of shades from yellow to deep red, and occasionally comes in blue and other rare colors; but the most coveted of them are the vibrant ruby red color found in the old beads.

According to the Venetians this type of red was made with rod of translucent pale pink or violet glass containing gold oxide. Sometimes in the early 1900s the gold was changed to selenium compounds for economic reasons and due to that, some of the deep ruby red luster was lost.

Cornaline d’Aleppo come in sizes from 1.75mm to 20mm in the drawn manufacture which are often finished by hot-tumbling to give them a roundish shape. In the wound manufacture they come from about 4mm to 27mm; other common shapes were also made like tubular, ovoid, discoid and cornerless cube.

The most exciting and sought after are probably the ones with trail decoration, sometimes enhanced with aventurine or even gold. They are for the most part, uncommon to rare. We will show all the ones we have found so far, including samples from other collections and sample cards from the Murano Museum and the Venetian bead book in the British Museum.

Along with this exhibit other earlier brown beads will be shown, some with stripes overlaying a translucent bottle green core and often described in the trade as “Pre-white hearts”. These are recorded in the trade as early as the 17th century.

Regular Cornaline D’Aleppo were produced in Murano from the early 1800s to the 1960s. They are seen on most of the old sample cards including the Levin cards (1851 - 1869) where small round pony size and tubular drawn are on "Beads traded for palm oil" card and the larger wound are on the "Beads traded for Ivory" card. They are on the Venetian bead book which notably displays the wound in round shape from 4 to 17mm. Both are housed in the Museum of Mankind in London.

Cornaline d’Aleppo are present on the card "Trade beads for central Africa" in the Pitt Rivers Museum in Oxford, the Stanley cards housed in the Royal Museum of Central Africa in Tervuren (Belgium), the Giacomuzzi bead sample book (1852 -1868). They are also on many sample cards including one of the earliest sample cards from the Conterie (1899), which are housed in our museum and shown at the end of the exhibit.

The drawn seed, pony and crow type have been replicated in several colors since the 1970/1980s in France (Salvadori closed in 2004), the Czech republic (Jablonex) until today and India in the wound version, but none can match that old glamorous red than the Venetians produced in the past.

For more information about the trade and the manufacture of these beads, we recommend Volume IV on White hearts, Feather and eyes beads from our series on Beads from the African Trade. 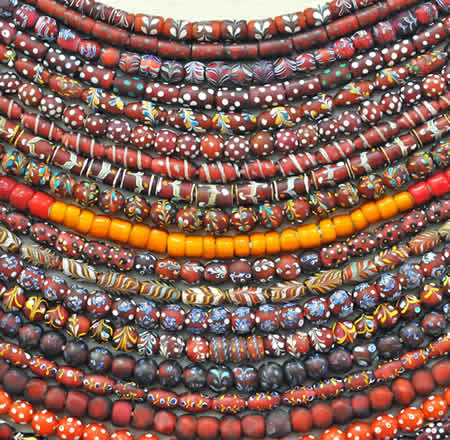