Welcome to our exhibit #11 on faceted Bohemian beads from the African trade.

This exhibit will focus on faceted Bohemian beads of drawn and molded manufacture including the famous ones often called “Russian blue”. Their nickname comes from the fact that they were brought in large part by Russian fur traders to the west coast of the US and Canada ranging from California to Alaska in the 1800s. However this type of bead was also found in other parts of North America.

The ones we will exhibit here are actually coming mostly from the African trade, mainly found in Nigeria around the area of Port Harcourt and the area of Cape Coast (Elmina) in Ghana. They are identical because they came from the same original factories situated in Bohemia, (today the northern part of the Czech Republic and a small part of what used to be East Germany).

They can be found from 3mm to 20mm in diameter and are usually cut from 6 to 8 sided simple or compound tubes with a few exceptions. On larger elongate shapes the original canes can have up to 12 sides, (this is the number of side we count on the center area, however it may be an optical illusion resulting from intense elaborate grounding). Each bead then was ground by hand at each angle creating a multi-faceted effect sometimes as beautiful as a sparkling gem, depending on the skill of the worker. Some of the larger elongate shapes can have as many as fifty or more facets.

They do come in a very large array of colors, sizes and shapes either drawn or molded and we believe it is time to sort them out in this exhibit to have some kind of record of what has been found so far. New additions will be added as new items will be found.

Some of these beads are seen on a few of the Levin cards notably the one “traded for slaves” housed in the Museum of Mankind in London and the card “Trade beads for central Africa” in the Pitt Rivers Museum in Oxford. The more common regular shape in dark blue are also seen on one of the Stanley cards housed in the Royal Museum of Central Africa in Tervuren (Belgium). There is also in the Jablonec nad Nisou museum an undated sample card showing them in both the compound light blue and the simple tubing translucent dark blue in sizes ranging from 5 to 12mm. We will point out for reference all examples that can be matched with sample cards that we are aware of.

The drawn examples will be followed by the molded versions, many of them also finished by hand grinding. In some of the molded beads like the "vaseline bead" the left over glass in the seams of the mold has been removed by hand finishing. We will also show faceted beads made by Bapterosses in France, and the Mexican copy made by Henry Merle in the 1980s. Finally we will include “firepolished” and “machine cut” beads from the Czech republic in the ongoing evolving process to duplicate them with more regular facets in a cheaper and easier mechanized mass production. We consider them, and by extension the Swarovski crystal beads made in Austria, as indirect descendants of the original “Russian blue”.

The last picture in the exhibit shows the Chinese version that were made in around 2005. We are not sure if they are drawn, molded, or hand faceted.

For more information about the trade and the manufacture of these beads, we recommend Volume V on Russian Blues, faceted and Fancy Beads from our series, which has more descriptions and has an elaborate introduction by Elizabeth Harris on the subject. 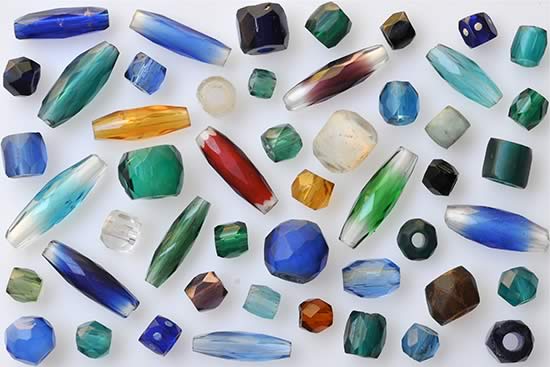