Welcome to our exhibit #10 on chevron/star beads.

This exhibit will focus on the controversial striped chevron/star beads, most of them Aspeo or heat rounded made either in Murano, Italy or The Netherlands, roughly from the 1700s to the 1800s.

Since the Dutch imported Venetian workers to Holland to make beads in this time period, we ourselves are unable to differentiate between those made in Venice and Holland. Hopefully further glass analysis will determine more accurately in the future their origin. Personally, we did not see any of this type of beads in the Murano Museum. A lot of specimens, however, have been and still are being recovered from the dredging of the canals in Amsterdam.

We will try to sort them as much as possible by color stripes, color combination of the stripes, the number of stripes, color center etc…It is not an easy task because there are endless variations of them, and new specimens are surfacing sporadically. So we apologize for not always being accurate with classification. We want rather to emphasize interesting, beautiful and sometime rare examples.

We will at the end of the exhibit show a few sets of other wound beads with inlaid star chevrons, other types of beads with no star pattern in both drawn and wound versions, interesting fakes, copies or just simulated versions of these beads, and finally some powder glass from the Krobo people in Ghana, which may have been influenced by these star chevrons.

In the description, the color sequence is always described from the innermost to the outermost layer. The demarcation between layers are sometimes confusing due to the resulight of color contamination, inadequate mixture in the glass or just some sloppy work. In many examples there may have been an outer clear glass which disappeared with wear and aging. We chose to describe and count the layers as visually seen rather than actually intended. All star points have the standard twelve points unless otherwise noted.

For more information on the history and technical aspects of chevrons, please see our Volume VII Chevron and Nueva Cadiz Beads on the publications section of our website.

We will add to the exhibit whenever new discoveries will be made. 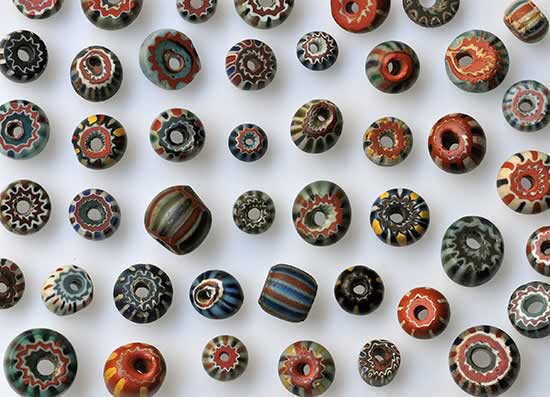